I love this book. After reading it a second time, I can happily and honestly say, it’s gotten better. Why? Because the first time I read it, I was about ten years old, so I didn’t really understand the meaning, concept or what was even going on. But now I know that this is an amazing book and it was worth reading twice. It’s a pretty memorable book. I put it down over four months ago and I can remember nearly everything  in it (and I’ve read a lot of books since then, so there are a lot of different stories going through my head for this one to compete with.

I’ve read the second book in the series as well (which is called ‘Salt and Stone’) and I wish there was a third one! To be honest, I don’t even know if you can call two books a series. I know that three books is a trilogy, but what is two books? If Victoria Scott writes a third book I will be happy to buy and read it.

The story is about a girl called Tella, who (I don’t know if it says this in the book) I am pretty sure is 16 years old. Her brother has cancer and it’s getting worse. Tella lives in the middle of nowhere in modern day America. She has no access to technology, as she now lives well away from the city she used to live in (where her friends are and where she used to be able to connect to the Internet). They moved because her Mum thought the countryside air would help her brother live a little longer or even (and there is very, very, little chance of this) surviving.

Tella and her family have lived there for about a year and Tella hates it. Why? Well could you imagine being about 16 and living without any technology? Away from all your friends? Not being able to contact them. It’s pretty bad.

Tella finds a blue box in her room – it seems to have appeared out of nowhere. Inside it is some sort of small device that looks a lot like a hearing aid. She finds a little blinking red light on it and is happy because this could mean technology (she’s had no access to  Technology for at least 9 months). She decides to put it into her ear and, on the basis that it also looks a bit like a head phone earpiece, hopes to hear some new music. There’s no music; instead she hears audio that could change her life. It sends her on a huge adventure with tonnes of action.

I can happily say that this is one of my favourite books ever. Honestly, I highly recommend it. Definitely read it if you like the adventure genre. I’d put this book into the same genre as  books like the Hunger Games. It is almost like the two books in the series should be the same book, though that would be way too long for one book. But it would make sense. 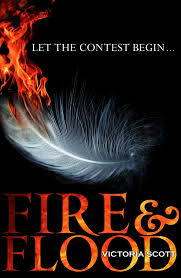