This is one of my Dad’s all time favourite books and he asked me to read it to see what I think. I like most of Roald Dahl’s other books, so I didn’t mind. They are easy to read and never too long. His books are deliberately written to keep kids turning the pages. It is really easy to imagine what is going on in the book. I found the book a bit old fashioned and I am not sure I’d have chosen to read it if I were picking books in the library.

It is about a nine year old boy called Danny. Danny doesn’t have a Mum. He lives with his Dad in an old wooden caravan beside a little garage they own. They fix cars and have fuel pumps.

Danny loves his Dad who is called William. They spend so much time together working in the garage (they are both always in dirty clothes!). Danny can already take a car’s engine apart and put it back together again. Danny has skills! Danny really looks up to his Dad. You can tell they love each other and that Danny’s Dad is as good as having both parents (he tells brilliant stories).

The way they live in a gypsy caravan is a bit funny. They don’t have electricity and I am not sure where they go to the toilet. I don’t know why they need to live like they are camping if they own a garage. I guess they are meant to come across as a bit poor. This is probably because their garage is in the middle of nowhere, with just a few customers.

Danny has a tough life. This is shown when his teacher hits him across his hand with a cane (teachers used to be allowed to do this) because he thinks he was cheating. Danny’s Dad goes mad when he sees the mark. He shouts: ‘Who did it?’ ‘Was it Captain Lancaster?’ Danny says: ‘Yes, Dad, but it’s nothing.’ I understand this. I’ve been in trouble in school and I wouldn’t want my parents to know about it or get involved. I felt sorry for Danny.

One night, Danny’s Dad isn’t home when wakes up when it is still dark. Danny is scared but waits and eventually his Dad arrives home. His Dad hadn’t expected him to be awake and has to tell Danny where he has been. It turns out he has been breaking the law. He went to poach (steal) pheasants (birds you can eat – rich people like to shoot them) from the big farm of a horrible rich man called Mr Victor Hazell. I am not interested in pheasants and wouldn’t eat one, so I don’t really get the point of stealing them.

Danny’s Dad hates Hazell because he is always so rude when he stops to buy petrol. Danny knows Mr Hazell doesn’t like him and his Dad. The book makes you feel the same way. I really wanted Danny and his Dad to steal the pheasants from Mr Hazell (though this makes me sound bad!).

Danny’s Dad used to go poaching when his Mum was alive. It was his favourite thing. After Danny’s Mum died, he had to look after Danny until he was old enough to leave him safely at home. He explained this to Danny and Danny said it was ok to go so long as he told him before he went!

One night when William goes poaching, he is gone so long that Danny starts to worry (he knows it is dangerous as William tells him he has been shot in the bum running away before!). Eventually, he thinks there must be something wrong and drives one of the cars they are fixing to where he thinks his Dad will be. This bit is funny and a bit scary, as you keep thinking one of them will get caught by the gamekeepers (the pheasant guards) or the police. Danny’s Dad has broken his ankle and Danny saves him.

After this episode, William and Danny hatch a dastardly plot to steal all of Mr Hazel’s pheasants and I mean all of them. I won’t tell you how or if they succeed. I’ll just tell you that this bit makes the entire book worth reading. Who do you think wins? The rich man or Danny and his Dad?

I think I might be a bit lonely if I were Danny and living just with my Dad (with no Mum, siblings and Danny doesn’t bring friends home from school – maybe he’s embarrassed). This book shows you how life can be fun and happy even when things are not great. Apart from the poaching, this book reads like a true story. It is a funny book – not laugh out loud (LOL funny), it just made me smile. I thought it might be funnier. I’d say it is a bit of an adventure story.

It’s quite an old book now (the inside cover says 1975) and I think this shows a bit. This would be a good book for a Dad to read a son when he is about 7 or 8. 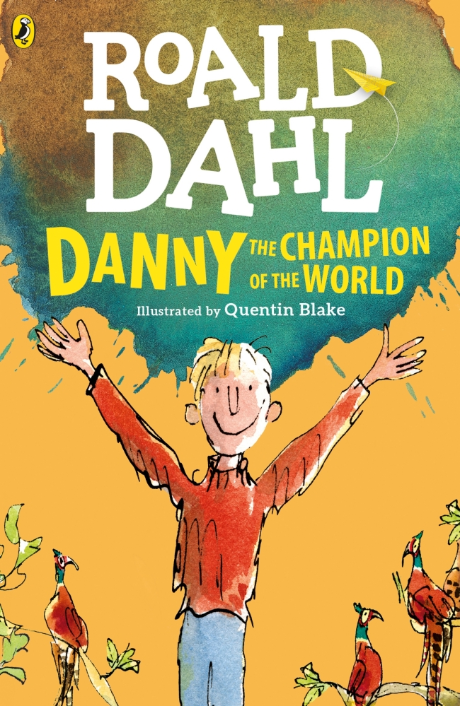